A great cultural heritage, the ancient capital of Hue in the central province of Thua Thien-Hue has become an attractive destination on Vietnam’s tourism map after its odyssey through difficulties. 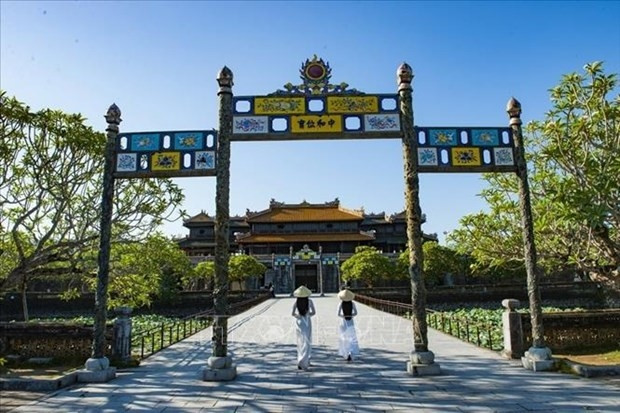 At Hue Imperial Citadel (Photo: VNA)
Nearly three decades since its recognition as a World Cultural Heritage by UNESCO in 1993, the Complex of Hue Monuments have passed the stage of emergency rescue and is transitioning to the one of stability and sustainable development.

The Hue Monuments Conservation Centre is building a master plan on the preservation and upholding of the Complex of Hue Monuments’ values till 2030 with a vision to 2045 to fully realise the values of tangible and intangible heritages, thus laying a legal foundation to tap and uphold cultural heritages which are to become the “nucleus” of Thua Thien-Hue heritage urban area in the future.

The Nguyen Dynasty (1802-1945) was the last feudal rule of Vietnam that left the capital of Hue with rich tangible and intangible cultural heritages of outstanding universal value.

According to researchers, among the ancient capitals of Vietnam, Hue is the only to keep the overall artistic architecture of the Royal Palace intact, which consists of citadels, palaces, temples and mausoleums.

Through wars and severe climate conditions in the central, the complex was devastated.

The centre is holding photos of the relic taken decades ago, with many areas becoming ruins.

Director of the centre Hoang Viet Trung said together with heavy consequences of the wars and difficult circumstances of the country during the first period of liberation, the relic management and preservation work faced difficulties due to limited technological capacity and investment.

He stressed that Hue heritages are in danger and on the edge of the abyss of doom and oblivion. Only the attempt of the Vietnamese Government together with the international community could help them out of this reality.

Following the appeal, an international campaign to support Hue was widely deployed. In mid-1982, the Hue Cultural and Historical Relic Management Company was established, then renamed the Hue Monuments Conservation Centre.

Over the past near three decades, some 200 works and items have been restored and upgraded. Provincial authorities have also relocated over 1,800 households out of relic protection areas.

The establishment of the Hue Monument Preservation Fund is expected to raise funds from not only from the State budget but also organisations and individuals.

The province is also issuing lottery to pool resources for preservation.

In the near future, the centre will restore a number of key works in the Citadel. 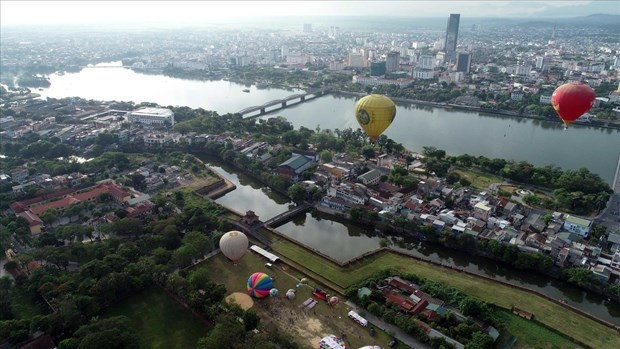 At hot-air balloon festival in Hue (Photo: VNA)
Recently, the Ministry of Culture of France provided a non-refundable aid worth over 840 million VND (nearly 36,000 USD) to restore the roof of Khai Tuong Lau (Khai Tuong Tower) at An Dinh Palace in the complex.

The project aims to repair roof leaks, and minimise the risk of damage to other parts of the building, contributing to returning the inherent beauty of the palace and promoting the overall value of An Dinh Palace relic.

The centre will be responsible for implementing the work.

Trung said it requires thorough preparation to build a record of restoration project, including studying materials and collecting feedback from experts and scientists. Therefore, a roadmap and plan are needed to ensure space for visitors.

The centre also pays special attention to the preservation and upholding of intangible cultural values of the Nguyen dynasty.

It conducted a number of scientific studies to revive important royal rituals such as sacrifice ceremony to Heaven, Xa Tac ritual ceremony as well as festivals like Legend of Huong River, Palace Night, and others.

All have become attractive tourism products and highlights in Hue festivals, contributing to spreading heritage value in the contemporary life.
VNA