Recently, many youngsters in Hai Duong have made and shared videos about the provincial land and people, thereby contributing to building and spreading the image of their homeland tourism to many tourists. 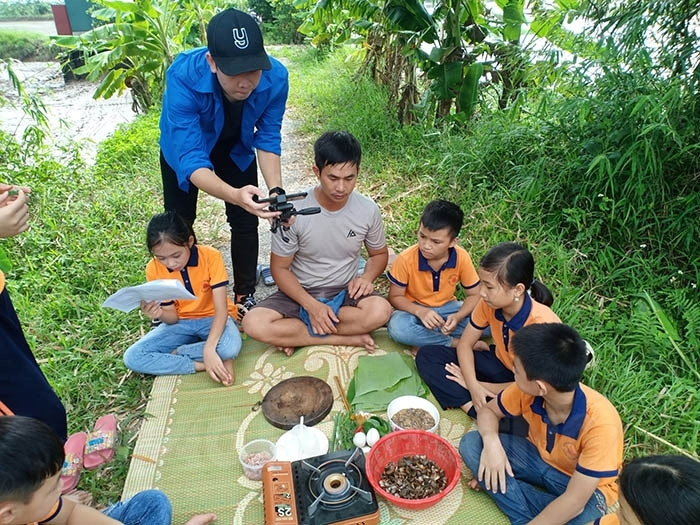 Pham Manh Cuong, Secretary of the commune Youth Union, said the club had previously assigned each member a task, including giving ideas and writing a script, carrying cameras, arranging each scene in the video, etc.

With the theme "Tu Ky hometown in my eyes," the club organized a group of pupils to visit the area and cook dishes from ragworms and small crabs.

"Though the quality of the video is still limited, and the filming crew is unprofessional, it is the passion and enthusiasm of young people to bring the image of Tu Ky closer to tourists in and outside the province because no one understands the cultural beauty and traditions of a locality as fully as the people born and raised there," said Cuong.

From personal and unique perspectives of the youngsters, truthful images like rice fields or rustic dishes became lively, attracting a large number of viewers.

The video was widely shared on social networking sites and won first prize in this year's Tour Guide 4.0 Contest in Tu Ky district.

Furthermore, the club members have made many videos to introduce OCOP products of Tu Ky district, the atmosphere of the 2022 Spring Crop Organic Rice and Ragworm Festival, etc. via TikTok, YouTube, and Facebook, creating positive effects.

To have a part in realizing a project to build and develop tourism in Tu Ky district in the 2021 – 2025 period, the district Youth Union registered the establishment of Young Tourism Propagandist Clubs by all grassroots Youth Unions to propagandize the history, culture, and cuisine of Tu Ky through videos, articles, etc. as breakthrough work in 2022.

To date, such clubs have been set up in all 23 communes and townships in the district.

Recently, a team of four youngsters in Quang Thanh commune, Kinh Mon town, has made and shared videos about the land and people there.

Though not well-trained, all members have one thing in common: a passion to make videos to popularize the image of their hometown.

At a meeting with the provincial Youth Union's Standing Board last March, First Secretary of the Central Youth Union Nguyen Anh Tuan stressed that each Youth Union should be responsible for propagating the land and people of the Eastern land.

It can be videos about the history, culture, and cuisine of Hai Duong, even young people can get rich from this way...