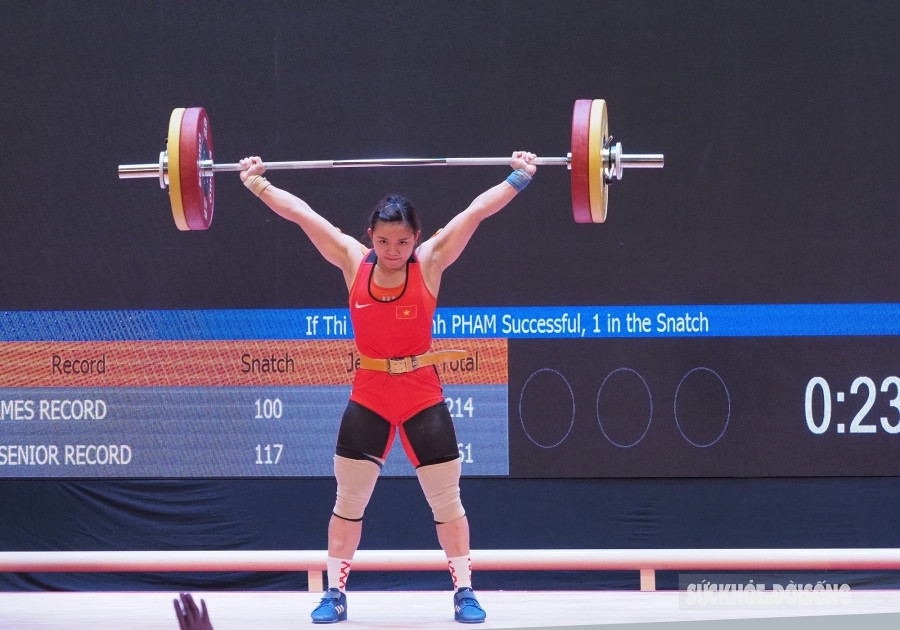 Thanh's 104kg is the new record in the snatch event, 6kg higher than the old one
Weightlifters set records one after the other on May 21 at the Ha Noi Sports Training and Competition Centre.

Among them, Pham Thi Hong Thanh had no worthy rival as she broke three records.

The Vietnamese athlete is the defending champion in the U64kg category, where she competed against four rivals, including powerful Quinilitan Ando Elreen of the Philippines, who threatened her crown at the last Games three years ago.

Time flew fast, but Thanh practised hard. She showed her excellence in the snatch event with the heaviest lift of 98kg in the first attempt. She then increased to 101kg and 104kg in the last and succeeded.

Thanh's 104kg is the new record in the snatch event, 6kg higher than the old record.

In the clean and jerk, Thanh was also the last athlete to perform as her starting weight to lift was the highest at 120kg.

Thanh managed her lift and succeeded in the second attempt of 126kg, a new Games record, 2kg higher than the last.

With a total lift of 230kg, she secured the third record of the day, a full 16kg heavier than the old record Thanh set in the Philippines Games.

Her nearest rivals were Elreen and Tsabitha Alfiah Ramadani of Indonesia, who despite great effort could only lift 223kg and 216kg, respectively.

"I was nervous but excited while waiting for my day. I couldn't wait to lift the weight," Thanh said.

"But when I am on the stage, seeing my family, friends and supporters cheering for me, every worry is gone. I told myself that I have to win, and I have to lift it all."

The Hai Duong province-born athlete said in the last three years, she focused on upping her capacity while fixing her mistakes to make sure she would hit her best peak for the SEA Games.

"My coaches and I tried to improve my level while I was practising. I also research well-known weightlifters to learn more from them. The gold medal today is a sweet result for me after years of hard work," Thanh said.
VNS