Aside from people’s proactive preservation, authorities at all levels in Gia Loc district also care about developing traditional cultural and artistic movements. 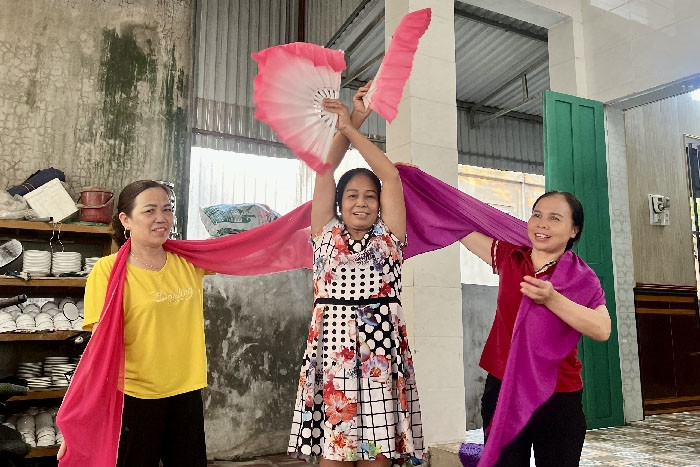 Members of the Cheo Club of Phuong Bang hamlet, Hong Hung commune, practice
The authorities and residents of Gia Loc district have tried to take many measures to preserve and prevent traditional performing arts like cheo (traditional operetta), folk song singing, and ca tru (ceremonial singing) from being inferior to modern entertainment forms.

To prepare for a celebration for the International Day of Older Persons (October 1) and the Congress of the Farmers' Union of Phuong Bang hamlet, Hong Hung commune, the hamlet Cheo Club is passionately practicing a dance performance entitled "Que Huong On Bac" (Homeland's Gratitude to Uncle Ho) and some other musical performances.

The club has 20 members, aged 40 – over 70. To maintain regular activities, the club has set forth operating regulations and fixed the 25th of every month for club activities.

When there are conferences, events, or communal house or pagoda festivals, the club will practice longer to bring special performances to the audience.

As one of the writers of many scripts used by localities to perform at festivals, Nguyen Duy Xuyen, Vice Chairman of the Scripting and Stage-management Club under the provincial Center for Culture and Arts, residing in Vinh Due hamlet, Dong Quang commune, believed that to maintain traditional performing arts, first of all, it is necessary to have love, passion, and enthusiasm for them.

"I focus on writing scripts about resistance wars against foreign invaders, historical figures, people successful in learning, etc. Each spectator will learn lessons from plays, thereby realizing the value of the traditional art and having a strong attachment to it,” said Xuyen.

Aside from people’s proactive preservation, authorities at all levels in Gia Loc district also care about developing traditional cultural and artistic movements.

According to Tang Ba Duc, Deputy Director of the district Culture and Information Center, the district authorities annually coordinate with specialized agencies of the province to organize two courses on traditional culture, such as cheo and folk song singing, dancing, etc., for 50 – 60 people/ course.

The district authorities have intensified propaganda, encouraged and supported hamlets and residential areas to set up cultural and performing clubs. To date, the district has had three cheo clubs in the hamlets of Phuong Bang in Hong Hung commune, Hoang Kim in Yet Kieu commune, and Vinh Due in Dong Quang commune.

Every year, the district Culture and Information Center also assists some performing clubs and groups with musical instruments and coordinates with communes and townships to search for talents and train teenagers and children having an aptitude for singing.

The district Culture and Information Center is training Gia Han, eight years old, in Toan Thang commune to be proficient in singing ca tru because she is very gifted.

Besides, the district authorities have also organized many cultural and performing activities like Lullaby and Folk Song Festival, Amateur Singing and Dancing Festival, etc. to encourage movements.

Each commune and township of Gia Loc district has different ways to preserve traditional cultural and artistic genres.

According to Pham Thi Hoai, Chairwoman of the Women's Union of Thong Kenh commune, the local authorities annually work out plans to hold activities on holidays, New Year Festival, etc. and inform hamlets for performing groups to proactively practice.

The commune authorities have also chosen talented people loving performing arts to develop a core team specializing in participating in contests and performances of the district and province.