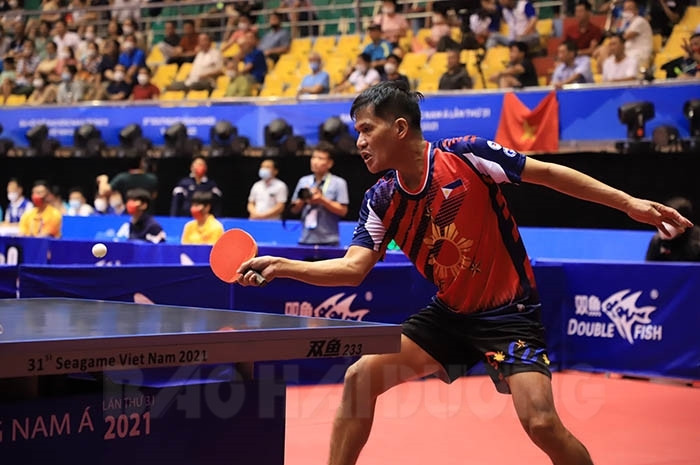 Filipino player Gonzales is still enduring despite his age and has a very uncomfortable chopping style
He is the oldest player participating in the ongoing 31st SEA Games table tennis event at the Hai Duong provincial Gymnasium.

Perhaps no one would have known Gonzales if the Philippines had lost to Thailand in the quarterfinals of the men's doubles, but in fact, they won in a match with many tense and attractive passes.

A master of chopping, Gonzales often shows off his forte techniques and waits for his opponent's mistakes.

"We knew Gonzales well and tried to counter but failed. The longer he chopped, the more flexible his wrist became while we attacked a lot and our wrists got strained, making the accuracy in the final shots significantly reduce," said Padasak after the defeat.

Several players decades younger than Gonzales are coaches of teams in the region, many of whom have retired for a long time. As for this player, he doesn't want to stop despite his age. He said that if the Philippine Table Tennis Federation still needed him, he would still participate in the next SEA Games.

"I think my biggest strength at this SEA Games is experience. The level of Filipino players is still lower than many countries in the region, so I need to be here to help them. I don't think I can compete for a medal in this tournament because of my age, but I will try to give the best matches I can," said Gonzales.

Gonzales first attended the SEA Games in 1995 in Thailand (SEA Games 18). To date, he has taken part in 14 consecutive SEA Games and won two silver medals in men's singles.

Referring to Gonzales is referring to the master of super chopping techniques. Many famous players in the region, including Vietnam, have been defeated by him.

Most recently, Nguyen Anh Tu lost 2-3 to Gonzales in the qualifying round of men's singles at the 30th SEA Games.

Le Huy, the current coach of the Vietnamese team, and famous players such as Tran Tuan Quynh and Doan Kien Quoc were beaten by Gonzales several times.

Vu Manh Cuong is the only Vietnamese player yet to lose to Gonzales.
TIEN MANH