Hai Duong in the eyes of international visitors

Many international players, coaches, and referees have had an opportunity to explore Hai Duong during participation in the 31st SEA Games table tennis event there. 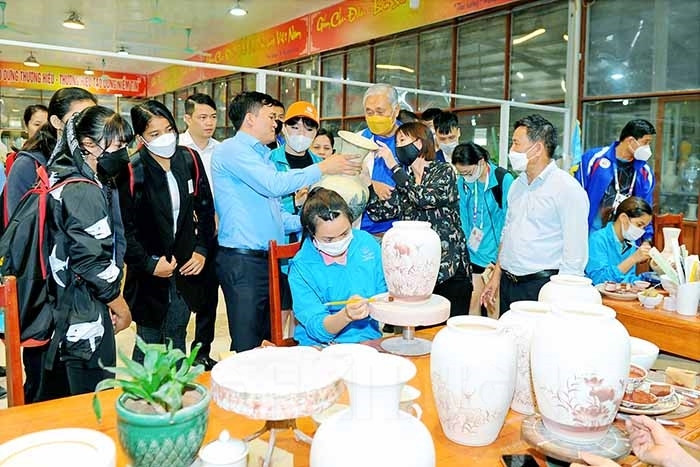 Players and coaches from countries participating in the 31st SEA Games table tennis event in Hai Duong visit and learn about the process of making Chu Dau ceramics
Friendliness and hospitality were the comments of most international players, coaches, and referees.

Singaporean player Angel Laude said reception at the accommodation was thoughtfully and enthusiastically done by the organizers.

"The hotel has offered many different appetizing dishes for nearly a week. We enjoyed a lot of delicious dishes like banh cuon (steamed rolled pancakes), pho (noodles), vermicelli, mung bean cakes, ramie cakes, etc. I like mung bean cakes the most, they taste strangely and very impressively," said Angel Laude.

Most of the international players were surprised because all matches were crowded with enthusiastic spectators.

On May 16, a large number of players, coaches, and referees from Laos, Cambodia, the Philippines, Singapore, Thailand, and Malaysia visited many famous relics and tourists attractions of Hai Duong such as Con Son – Kiep Bac, Chu Dau pottery, and lychee gardens in Thanh Ha district.

Most of the players, coaches, and referees said that Hai Duong had a very beautiful and poetic landscape and guides were nice and friendly.

"I read about Tran Hung Dao and now have a chance to visit his palace. We were very impressed when directly rotating the Cuu Pham Lien Hoa (nine-tier lotus-shaped) tower in Con Son. Thank the Vietnamese Government. I will definitely return to Hai Duong to learn more about the local culture and people if having an opportunity," said coach Johanne Remaneses Bual.

"Your hometown is very interesting. We love picking and enjoying lychees in gardens with our own hands the most. I picked a bunch for my friends at the hotel. This is a trip with many memories, I will post photos on my personal page and tell my relatives and friends about this trip," said Cambodian player Chendaroth Khiev.

Trying making ceramics in Chu Dau, many players said they had heard about the famous Chu Dau pottery of Vietnam and then saw it with their own eyes.

The most interesting thing was listening to explanations, helping them understand that patterns on Chu Dau ceramic vases demonstrate the special and unique culture of the Vietnamese nation, daily life, as well as the human value of Buddhism and Confucianism.

The thoughtful preparation of playing and accommodation conditions for international players by the Organizing Committee in Hai Duong has initially made a good impression.

All international players, coaches, and referees hope that the 31st SEA Games will be a great success and spread the image of Hai Duong and Vietnam closer to friends in the region and the world.
THE ANH