Despite the summer heat, gourmets are still searching for dishes cooked from vit chay dong — ducks raised in the field or free range ducks. 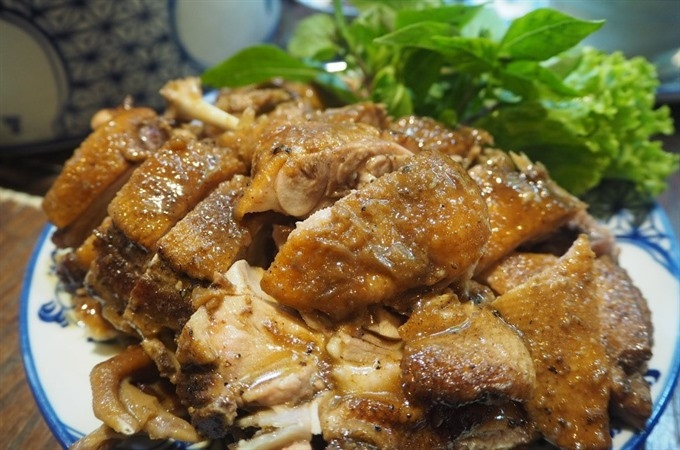 Quacking good: A plate of roasted field ducks that could make your mouth water. Photos courtesy of Quan An Ngon Restaurant chain in Ha Noi
The meat is so tasty that if you try it once, you’ll never forget it.

In Viet Nam’s Cuu Long (Mekong River) Delta, the country’s rice bowl, ducks enjoy happy and healthy lives. After rice is harvested from the immense fields, thousands of such ducks arrived to live here for several months. They comfortably swim and jump here and there to eat corn, catch shrimp and fish and sleep in any brushwood they like. A duck raiser often pitches a tent in the field to sleep at night, said Huynh Van Mung, a duck raiser from An Giang Province.

“Both the ducks and the raiser live a nomadic life for at least three months until the ducks are grown up thanks to the fields. Each duck can weigh from 1.5 to 2 kg. Locals call it the duck season. It means the ducks are suitable for cooking,” said Mung.

“My mother often boils a duck for my father and several of his neighbours to sip a cup of wine with fresh banana salad before we all gather around a tray to enjoy duck soup,” said Mung.

The soft and sweet duck meat simmers with sấu fruits and coconut juice. The aromatic flavour of the dish makes his mouth water prolifically, said Lam.

“It is so enjoyable since having the first bite of the duck meat. The dish is eaten in hot weather but I still feel cool, certainly thanks to the duck’s upbringing in nature, and the sour flavor of sau fruits that defeat the heat of summer,” said Lam, adding that the dish’s mixed fragrant sour and sweet flavour has forced him to learn how to cook the food at home. 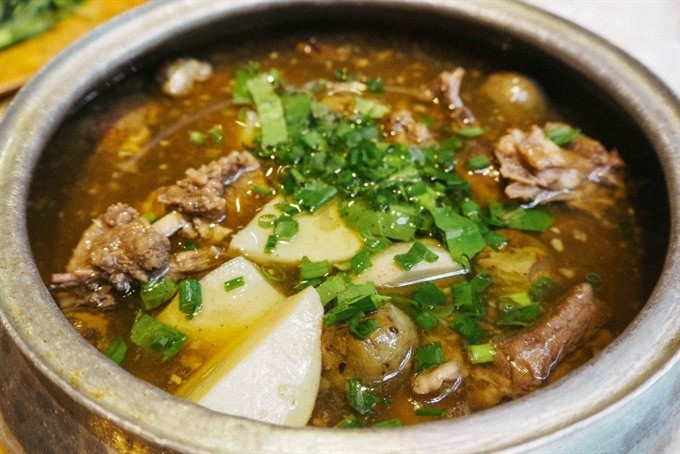 Old duck: Vit om sau has become a specialty of Ha Noi over hundreds of years
The duck should be salt rubbed to deodorize any fishy smell, cut it into matchbox-shaped pieces then mix them with ginger, dried onion, pepper, MSG and a spoonful of white sugar for 35-45 minutes, said Chi.

“We should fry garlic with cooking oil before putting the cut duck pieces in the pot, stirring it well and cooking it with a light fire for five minutes before pouring one litre of water, sau fruits, taros and citronella in the pot and continuing to fire it until the duck is mostly cooked and can be turned, then put mushroom in and boil it for another five minutes, ” she said.

Before eating, you should rub the sau and put coriander in the pot, Chi added.

Apart from the dish of vit om sau, Lam said he is still interested in Quan An Ngon’s roasted duck because it is soaked with mixed special spice so delicious that Chi said she is sorry for not publishing it widely.

Unlike other roasted ducks available in the city, Quan An Ngon’s roasted duck is covered with a rich brown colour that makes you crave it at first glance, said Lam.

“Each piece of roasted duck looks shining but soft and delicious. I feel that I could eat until I’m full without being uncomfortable. Taking the piece with my finger, slowly dipping it in a bowl of mixed soya sauce, garlic and chilli and eating it with coriander and a piece of rice vermicelli and again slowly biting them allows me to enjoy an interesting combination between the crispy duck skin and its soft and fragrant meat. I feel as if I was enjoying the dish in the rising windy fields in the countryside,” said Lam.

Herbalist Nguyen Van Tuat from the National Hospital of Traditional Medicines said duck meat raised in the field is highly nutritious. One hundred grams of duck meat has 25 grams of protein, much higher than beef, pork meat, fish and egg.

Tuat said it is also full of other nutritious content such as calcium, phosphorus, folic acid and vitamins B1, B2, A, D and E.

“Duck, particularly of the male duck with a green head colour that has black bones and a black mouth, can treat diuretic, heat and TB and is very good for organs such as heart, liver, stomach, lungs and kidneys. This kind of duck meat is also very good for weak patients after facing a fever, or who are puffed with oedema or pregnant women who are struggling to produce milk.

“However, duck meat is cold so ill people caught with a cold should not eat it,” Tuat warns.
HA NGUYEN (Vietnamnews)