Vietnam’s economic growth has been accelerating in 2022, with experts considering high-tech foreign investments as a driver. 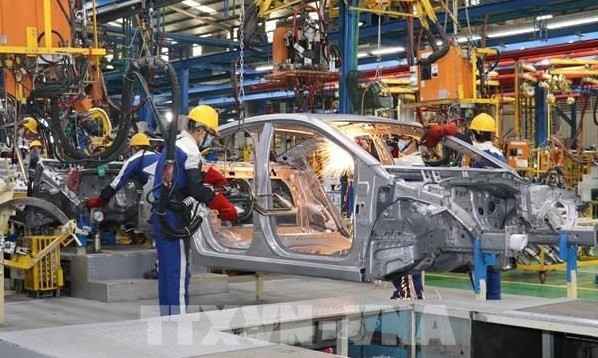 Illustrative photo (Source: VNA)
The World Bank (WB), International Monetary Fund (IMF) and others have sharply revised up their GDP growth forecasts for the country, with an increasing number of economists now expecting it to exceed 8% this year.

In a note, Kokalari said, quoting newly published research by economists at Harvard University, that one reason Vietnam is an economic outlier is that FDI is supporting the country’s manufacturing while also driving an increase in the complexity of products produced in Vietnam.

An increase in the complexity of the products a country is able to make is the single most powerful growth driver for a developing country's economy, according to the economist.

“The recent announcements by Samsung, Apple and others make us confident that high-tech foreign investments will continue propelling Vietnam’s economic growth for years to come,” he said.

Apple said it would begin producing watches and MacBooks in Vietnam, the first time they will be made outside China. 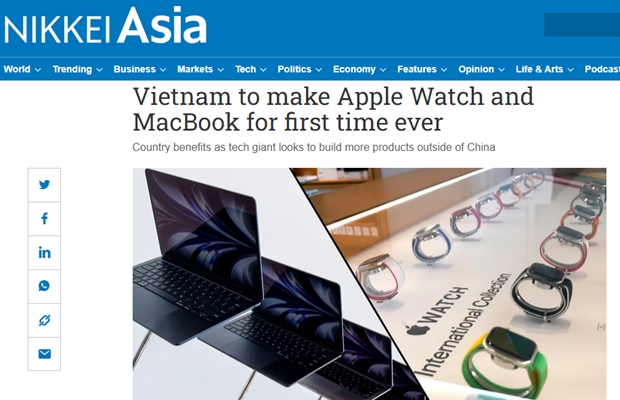 Illustrative image (Source: Nikkei Asia)
Apple has “big plans for Vietnam” according to insiders, who also noted that the Apple Watch is particularly complicated to manufacture because of the challenge of squeezing so many components into such a small case.

According to research by the London School of Economics and the World Bank, FDI is instrumental in helping “developing economies move into higher value-added parts of the value chain,” and high-tech FDI has had a big positive impact on Vietnam’s economy.

Furthermore, Vietnam achieved the biggest jump in Harvard's Economic Complexity Index ranking in the last two decades, partly because the Samsung and Intel investments attracted a flurry of other high-tech investments from Apple, LG Electronics, Dell, and a number of Japanese firms.

The primary motivations for firms to set up high-tech factories in Vietnam include a high-skill, low-wage workforce and the country’s geographic proximity to high-tech supply chains in Asia, according to Kokalari.

The former supports GDP growth in the short-term since domestic consumption accounts for two-thirds of Vietnam's GDP, while the latter boosts the country’s long-term economic prospects.

The net result is that the production of smartphones, home electronics and other products with a relatively high degree of complexity ultimately contributed over 1,000 USD of Vietnam's 3,000 USD per capita GDP in 2020.

The revenues and earnings of most companies listed on Vietnam’s stock exchanges are primarily linked either directly or indirectly to domestic consumption.

This gives active stock managers ample opportunities to outperform the benchmark VN-Index by assessing which companies’ stock prices are likely to benefit the most from their exposure to the higher spending by Vietnam’s emerging middle-class consumers that ultimately results from increased high-tech FDI inflows.

Kokalari said “Foreign-owned factories in Vietnam still import most of the components/production inputs they require to make the products they export, especially high-tech products like consumer electronics and smartphones.

“We expect the imported content of Vietnam’s exports to plunge and the local content contribution to soar as local firms develop their ability to supply foreign companies with production inputs in the years ahead.

“Next, the nascent wave of FDI into the production of some of the most complicated products ever manufactured in Vietnam should lead to more ‘spillover effects’ that will lead local manufacturers to diversify into higher value-added segments in the value chain.”

The plans by Apple and Samsung to produce some of the most technologically advanced products ever made in Vietnam would significantly boost Vietnam's GDP growth in the years ahead, and ensure that the economic “decoupling” that Vietnam achieved this year could be sustained in 2023.

“Our day-to-day interactions with a wide range of Vietnamese businesses – from large cap listed companies to ultra tech-savvy small entrepreneurs – continually make us appreciate the strong parallels between Vietnam’s economy in the 2020s and Japan in the 1970s, when that country embarked on its multi-decade climb up the global value chain.

“We remain extremely bullish on Vietnam’s economic prospects and by extension on the prospects for much higher stock prices in the years ahead.”
VNA