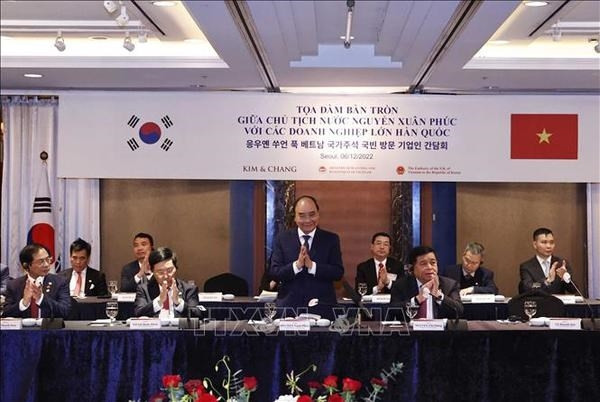 The Vietnamese State leader said he hopes through the forum, bilateral economic, trade and investment partnership will enter a new, brighter chapter.

He underlined that despite difficulties, Vietnam has managed to maintain macro-economic stability and promote post-pandemic recovery, offering abundant business opportunities.

Underlining the similarities in cooperation targets and interests between the two countries, President Phuc said that Vietnam and the RoK boast high potential for collaboration in digital transformation, green growth, new energy, big data, AI, biotechnology, and IT.

Briefing participants on Vietnam’s growth aspirations until 2045, the President said that the country will focus on digital economic transformation, green growth, science and technology development, and innovation for deeper international integration and more effective participation in the global supply chain, while concentrating on luring high quality FDI sources.

For his part, RoK Deputy PM and Minister of Economy and Finance Choo Kyung-ho highlighted a number of measures to promote bilateral cooperation and partnership between the business communities of the two countries in the next three decades.

He suggested the two sides strengthen collaboration in the supply chain to ensure economic security amid the COVID-19 pandemic and the global economic division, while expanding trade ties, especially after the Regional Comprehensive Economic Partnership took effect in February this year. In order to support partnership between the private sectors of the two countries, the RoK Government will strengthen dialogue under the Government mechanism, enhance financial capacity, innovate tax regulations and other cooperation platforms, he said.

Choo expressed his belief that with the efforts of the two Governments and business communities, in 2023, bilateral trade can reach 100 billion USD.

He held that along with traditional cooperation areas, the two sides should expand their partnership to green economy and digital economy as well as new industries.

The RoK is willing to share experience and technology with Vietnam in the fields of smart city, ICT, new renewable energy, environmental infrastructure, and together with Vietnam to increase investment in technology and human resources exchange, he said.

At the forum, President Phuc and RoK Deputy Prime Minister Choo Kyung-ho witnessed the signing of 15 cooperation documents between ministries, sectors, localities and businesses of the two countries.

They showed their interest in the Vietnamese market and highly valued Vietnam's investment environment and competitive advantages. Many affirmed to continue to expand investment and reinvest in the Southeast Asian nation in the coming time.

Highlighting Vietnam’s achievements in controlling COVID-19 and boosting socio-economic recovery and development at the same time, President Phuc noted that Vietnam is now the third largest economy among ASEAN members with GDP reaching nearly 400 billion USD. Many international organisations such as the World Bank (WB), Asian Development Bank (ADB) and International Monetary Fund (IMF) have raised their forecasts on Vietnam’s economic growth to over 7% in 2022.

Especially, both Moody's and S&P rated Vietnam's long-term credit at "stable" and "positive". According to WIPO's 2022 Innovation Index (GII) Report, Vietnam ranks 48 out of 132 countries, third in Southeast Asia.

The President stated that in the coming time, Vietnam will focus on bringing into full play its internal resources for rapid and sustainable development based on science, technology, innovation and transformation to the digital economy, perfecting the institution of the market economy, creating favourable conditions for the private sector and foreign investors, and proactively and actively integrating into the world with the implementation of commitments in 15 signed FTAs.

The Vietnamese State leader affirmed that Vietnam always considers the RoK an important and long-term partner, stressing the country hopes to work with the RoK to further deepen the bilateral strategic partnership with the important pillar and driving force being economic, trade and investment cooperation.

Vietnam has changed from merely "attracting" FDI in the past to "cooperating" with foreign investors in the long term in the spirit of equality, mutual development, mutual benefit and shared responsibility for the society, employees, and the environment, he underscored.

He called on RoK investors to invest in prioritised sector such as high technology, renovation and development research, and pledged to give them optimal conditions to join the value chain and the promotion of digital economic development in Vietnam.

Also on December 6, President Phuc had a meeting with Vice Chairman and CEO of Samsung Electronics Han Jong-hee, who revealed that his firm plans to increase investment in Vietnam to 20 billion USD in the time to come.

He said that Samsung’s R&D centre, which he mentioned in 2018, has completed and will be put into operation soon.

President Phuc congratulated Samsung Electronics on its successful business in Vietnam, with current capital of 18 billion USD and export revenue of 65.5 billion USD in 2021. He lauded the firm’s plan to increase investment in Vietnam, expressing a hope that it will continue to invest in support industry and smart technology, thus turning Vietnam into a new production hub and a venue for new technologies.

The President also spoke highly of Samsung’s efforts to realise its promise in building a R&D centre in Vietnam, inviting the firm to join the upcoming innovation exhibition in Vietnam.
VNA