Vietnam is a destination chosen by investors from the Republic of Korea (RoK) in the spheres of technology, environment and high-tech industry, heard a conference in Ho Chi Minh city on July 22. 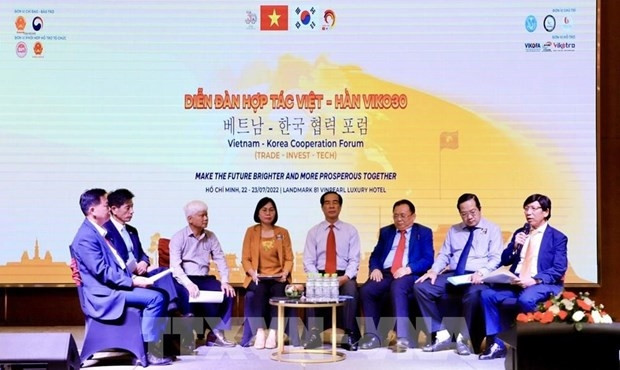 In his remarks, Ambassador Nguyen Phu Binh, Chairman of the Association for Liaison with Overseas Vietnamese (OV), said after 30 years of bilateral diplomatic ties, Vietnam and the RoK have become important partners, especially in economy.

The RoK is one of the biggest investors in Vietnam over the past years, significantly contributing to the Southeast Asian nation’s economic development, he said, adding that Korean investment has been expanded to other cities and provinces, apart from Ha Noi, Ho Chi Minh city and adjacent localities.

Kwon Sung-taek, Vice President of the Korea and Vietnam Economic and Cultural Association (KOVECA), viewed economic cooperation, covering investment and trade, as the biggest result in the bilateral relationship over the past three decades.

According to Kwon, Korean investments have been shifted from labour-intensive industries to others like manufacturing, high-tech and environment. Korean investors have also regarded Vietnam as a destination for technological transfer and personnel training cooperation.

He, however, pointed out policy-related obstacles to the investment, and suggested more harmony and transparency during the implementation of investment policies in Vietnam to attract more Korean investors.

Thang, who is also former deputy head of the Foreign Investment Agency under the Ministry of Planning and Investment, suggested the two sides regularly exchange information to better cooperate in specific areas.
VNA