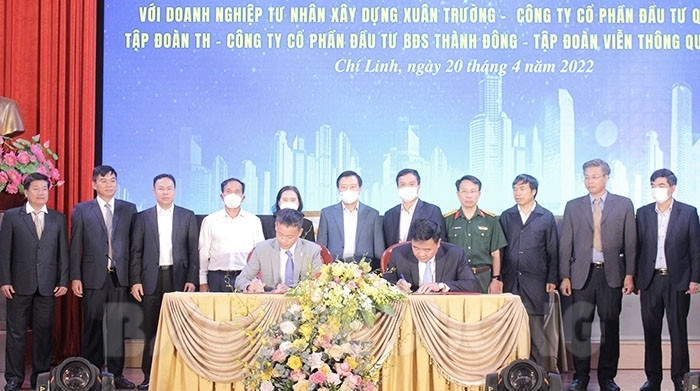 Leaders of the province witness the signing of a memorandum of understanding between a representative of Chi Linh city leaders and corporations and businesses
The People’s Committee of Chi Linh city held a conference on April 20 morning to announce the adjustment of the city’s master plan and a list for attraction of investment to the city until 2040.

As planned, Chi Linh city will be a cultural, service, and tourism center, a smart, green ecological, resort, and entertainment urban area with the development of hi-tech industry and agriculture.

Region 1, about 7,500 ha in area, will be the core one to develop spiritual, ecological, and resort tourism associated with preserving the cultural heritage and special national relic site Con Son – Kiep Bac. 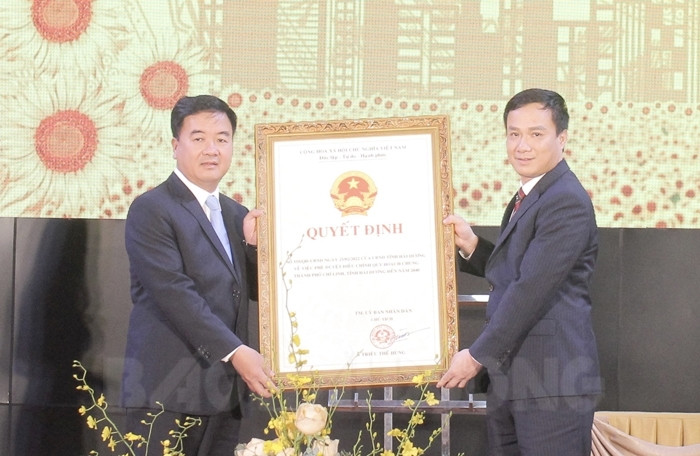 Chairman of the provincial People’s Committee Trieu The Hung hands over the decision approving the plan adjustment to the People's Committee of Chi Linh city
Region 2, covering more than 10,100 ha to the north of national highway 18, will develop ecological agriculture in association with resorts.

Region 3 with an area of approximately 10,600 ha will focus on developing new urban areas, commercial services, and hi-tech industry.

At the conference, Chairman of the provincial People’s Committee Trieu The Hung said that the adjusted plan was not only an important legal basis for the implementation, management and attraction of investment projects to the city but also had special significance for the construction and development strategy of the city as well as Hai Duong province.
Hai Duong News