Prime Minister Pham Minh Chinh chaired a dialogue with the Republic of Korea (RoK)’s Ambassador Park Noh-wan and representatives of Korean associations and businesses in Vietnam in Hanoi on July 30. 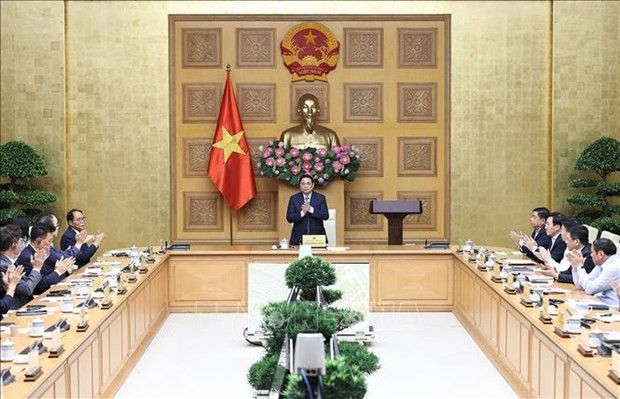 Prime Minister Pham Minh Chinh (standing) at the dialogue with Korean associations and businesses on July 30 (Photo: VNA)
The RoK, the largest FDI partner in Vietnam at present, is investing in 9,383 projects worth over 79.8 billion USD in 19 of the 21 economic sectors and 59 of the 63 localities nationwide.

Highlighting the two countries’ flourishing relations in various spheres, PM Chinh said Vietnam and the RoK have become leading partners of each other, and economic cooperation is always an important pillar of bilateral ties.

A number of Korean enterprises have been operating fruitfully and considerably contributing to socio-economic development in Vietnam, he noted.

He also took this occasion to thank the RoK Government and people for supporting Vietnam’s efforts in socio-economic development, including the COVID-19 combat.

PM Pham Minh Chinh speaks at the dialogue in Hanoi on July 30 (Photo: VNA)
Over the past 35 years of reforms, the Party and State of Vietnam have issues many policies and laws to attract foreign investment and create an optimal business climate that has gradually matched international practices. The foreign invested sector has been growing fast and effectively, becoming a crucial part of the economy and greatly helping with local development, according to the Government leader.

In September 2021, the PM held a dialogue with Korean businesses to learn about difficulties and obstacles facing them and also listen to their initiatives and proposals for institutional, policy and administrative procedure reforms in order to facilitate production and business activities.

So far, 25 of the 29 recommendations and proposals raised at that event have been handled, especially those related to COVID-19 prevention and control and business facilitation. Authorities of Vietnam are working to deal with the four remainders.

The PM asked representatives of Korean associations and enterprises to point out problems they have encountered and suggest ideas for further improving their investment, production and business activities in Vietnam, thus contributing to the development of bilateral relations.

Representatives of Korean associations and businesses at the event (Photo: VNA)
Ambassador Park noted the dialogue last September has given more strength to companies which were struggling with the pandemic’s impacts then, and they have received practical assistance.

He cited some economists as predicting that Vietnam can easily attain a growth rate of at least 6% this year, sustain macro-economic and exchange rate stability, and boost export - import growth even amid global economic uncertainties and disrupted global supply chains.

The diplomat attributed those achievements to the country’s stability and the Government’s effective governance, which is highly valued by the RoK Government and businesses.

Together with economic recovery, Vietnam’s trade and investment links with the RoK are also thriving, and if such recovery and growth trend is maintained, bilateral trade can reach 100 billion USD this year, ahead of the target of 2023, he added.
VNA