Danish toymaker LEGO has officially begun the construction of its 1 billion USD project in the southern province of Binh Duong as green investment starts to take shape in Vietnam. 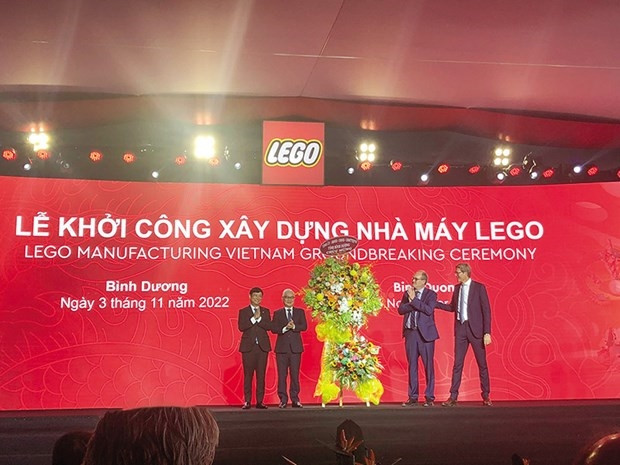 At the ground breaking ceremony of LEGO's plant in Vietnam (Photo: Baodautu.vn)
The project covers an area of 44ha in the Vietnam-Singapore Industrial Park III, making it the company’s sixth in the world and second in Asia.

LEGO CEO Niels B. Christiansen said it is the first factory designed as a neutral carbon facility. Apart from solar panels on the roof, the factory will also have a nearby solar power farm to meet annual energy demand and use energy-saving equipment to meet the minimum standards of LEED Gold, a green building certification used worldwide.

Once completed in 2024, the factory is expected to generate thousands of jobs for skilled workers, contributing to Binh Duong’s economic development in the coming years.

Although LEGO's project is considered an important milestone, this is not the only one contributing to the trend of green FDI inflows in Vietnam.

A few months ago, Pandora, a Danish jewelry manufacturer, decided to invest 100 USD million in building a new facility in Binh Duong. The plant is set to follow the LEED Gold standard and be powered by renewable energy. It will create jobs for more than 6,000 craftspeople and have an annual capacity of 60 million pieces of jewellery.

Recently, DHL Express, the world's leading international express delivery service provider, inaugurated its newest operation centre in Vietnam. It is worth mentioning that, with the goal of sustainable development at the heart of all business activities, the centre has been equipped with a series of technologies to help reduce carbon emissions and optimise efficiency.

Chairman of the European Chamber of Commerce in Vietnam (EuroCham) Alain Cany said that EuroCham is implementing an investment promotion programme, planning to bring 300 European enterprises in green economic fields to Vietnam to explore investment opportunities. Related feedback has been positive.

With policies to encourage sustainable growth, Vietnam can leap ahead of many other countries in the region, said Cany.
VNA