For the past two years, Hai Duong has been trying to innovating in-depth and focal investment promotion (IP) activities in the context of Covid-19’s significant impacts on the economy. 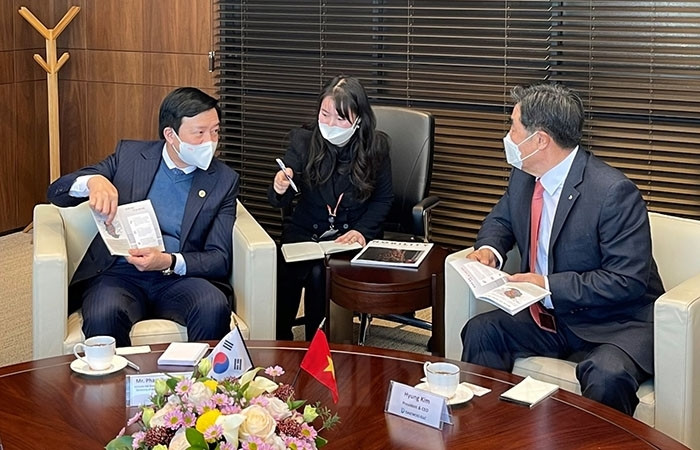 Secretary of the provincial Party Committee Pham Xuan Thang works with a South Korean business leader
Leaders of the province have directed innovation and improvement of IP quality, considering this a breakthrough for economic development and investment attraction.

Since the end of 2021, standing members of the provincial Party Committee have had many working sessions with delegations from the Ministry of Foreign Affairs, leaders of the Ministry of Planning and Investment’s Foreign Investment Agency, groups and enterprises from South Korea, Italy, and India.

This April, Hai Duong authorities will continue to organize conferences to meet and promote investment with Japanese and South Korean businesses.

At a working session with a delegation from the Ministry of Foreign Affairs at the end of 2021, the standing members of the provincial Party Committee agreed to sign a five-year cooperation program between Hai Duong province and the Ministry of Foreign Affairs to expand foreign relations, strengthen and diversify IP forms, and create an information bridge to propagandize the image and potential of the province to foreign investors.

At the end of 2021, within the framework of the official working visit of a high-ranking delegation of the Vietnamese National Assembly to India under the leadership of Chairman of the National Assembly Vuong Dinh Hue, Secretary of the provincial Party Committee Pham Xuan Thang met a number of Indian enterprises for IP.

In February 2022, Indian investors arrived in Vietnam to make enquiries in several localities and finally chose Hai Duong for investment in a pharmaceutical park project with a scale of more than 900 ha.

Besides, Hai Duong authorities have intensified the propaganda of the province’s image and potential to domestic and foreign businesses through communication coordination programs with a number of reputable and influential press agencies in investment attraction like the online newspaper of the Communist Party of Vietnam and the Vietnam Investment Review under the Ministry of Planning and Investment. 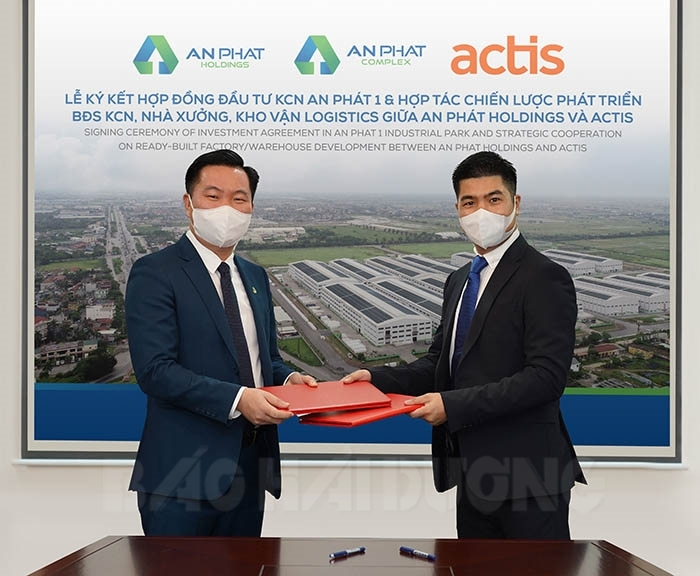 An Phat Holdings JSC. cooperates with Actis, a British investor in sustainable infrastructure development, for industrial park development
The provincial Party Committee’s Executive Board has defined "Flexible adaptation, breakthrough growth" as the theme of action in 2022.

Hai Duong puts businesses in the central position with the motto "Party committees and authorities serve the people and accompany enterprises.”

The provincial authorities clearly determine further concentration on industrial development to be the long-term strategy and the most important spearhead of economic development.

An Phat High-tech Industrial Park JSC. (a member of An Phat Holdings JSC.) is investing in the infrastructure of An Phat 1 industrial park in Nam Sach district.

The investor intends to lure 50 – 70 factories there. It is expected that by 2024, 100% of An Phat 1 industrial park will have been occupied. To attain this goal, since 2021, An Phat Holdings JSC. has conducted a lot of IP activities with the US, Italy, and many European countries.

With geographical location advantages, potential, and strengths of the province, especially the innovation of IP activities, Hai Duong will have an opportunity to receive high-quality FDI inflows. To do this, many businesses believe that Hai Duong needs changes in thinking and methods of construction, management, and operation of industrial parks and clusters and diversification of types of industrial parks in accordance with the international development trend.
PHAN ANH