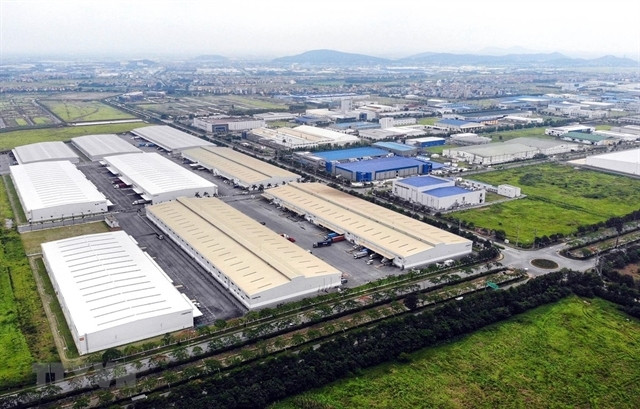 An industrial park in the northern province of Bac Ninh
Foreign direct investment (FDI) continued to flow into Vietnam's industrial property market, accounting for 19 per cent of total FDI or US$3.5 billion during the first nine months of the year, doubling the figure recorded during the same period last year.

Industrial properties will likely see the most growth, according to Savills Vietnam. Strong economic indicators in recent years have sent foreign investment soaring, especially in the northern and southern economic hubs.

Matthew Powell, director of Savills Ha Noi, the agency's northern headquarters, said Vietnam, in particular its industrial property market, was in a good position to attract additional FDI with a majority of its industrial hubs at full capacity and more projects underway.

In a report released by the agency in September, industrial property supply remained stable with demand soaring, especially in Ha Noi and Ho Chi Minh city. Improved infrastructure and enlarged land allocation have resulted in increased ability to compete but not without a surge in prices.

On average, rental for industrial property in Ha Noi has reached $140 per square metre (sqm), Ho Chi Minh city $200 per sqm. Prices tend to be slightly lower in the two industrial hubs' neighbouring provinces and could be strong alternatives as provincial authorities have distributed more land to industrial projects.

During the second quarter of 2022, nine industrial projects worth a total of VND29.4 trillion ($1.23 billion) with a land area of 2,472 hectares have been given the green light, which have been projected to go into operation during 2023-25.