Important sources in caring for poor people on Tet occasion

Every time Tet (Lunar New Year) and spring approach, movements to care for the disadvantaged rise up throughout Hai Duong province.

Dai An JSC. spends VND650 million in presenting gifts to poor people on Ky Hoi Tet occasion
With their affection and responsibility, businesses have accompanied all-level authorities and sectors to organize a lot of practical activities.

Businesses are the cadre actively taking the lead in caring for disadvantaged people during Tet. This has been proved through seven times of coordination between the Provincial Fatherland Front Committee (PFFC) and relevant agencies to organize the Spring Warmed with Love program.

On the list of 100 typical organizations, units, and individuals supporting the program on the occasion of the 2018 Mau Tuat Tet, enterprises accounted for nearly 70%.

At the program, the enterprises, organizations, and benefactors donated more than 20,200 gifts worth a total of over VND10 billion to the poor.

Many Hai Duong-based businesses determine donation and care for disadvantaged people on Tet occasion as their affection and responsibility for the community.

Though production and business sometimes encounter difficulties, a lot of enterprises do not hesitate to make donations to the poor every Tet and spring.

This year, the Spring Warmed with Love program presided over and co-organized by the PFFC continues to receive enthusiastic responses from enterprises.

By the end of January 10, nearly 50 enterprises had registered to offer 2019 Ky Hoi Tet gifts worth about VND2.3 billion to poor families. The number of registrants will definitely increase much in the coming days.

On January 9 evening, the Hai Duong Young Business Association launched the Spring Warmed with Love program and initially persuaded about 40 member businesses to donate more than VND800 million to help poor people on the occasion of the upcoming Tet, an increase of VND100 million over last Tet.

This year, Dai An JSC. has donated VND650 million to present poor people with gifts.

"We always take ethics as the cornerstone of business. We annually reserve VND2 – 3 billion to support movements for the poor and social security," said Truong Tu Phuong, Chairwoman of the Board of Directors of Dai An JSC.

A representative of Hai Duong Lottery One Member Co., Ltd., said the company had prepared 88 Tet gifts (worth VND500,000 each) for presentation to poor families in Sao Do ward (Chi Linh provincial town) and supported a martyr's family under difficult circumstances in Gia Loc district with VND10 million. 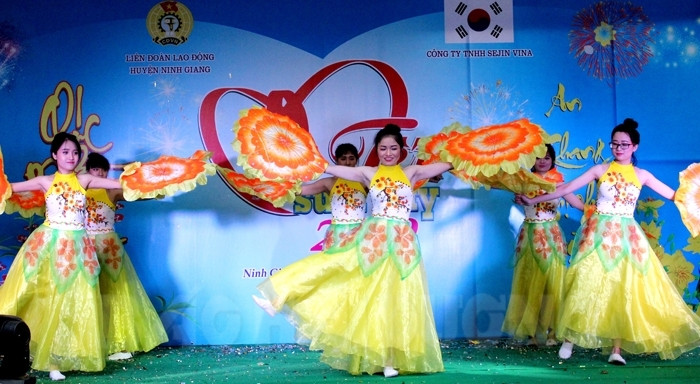 Sejin Vina Co., Ltd. (Ninh Giang) organizes a Reunion Tet show for more than 700 employees on 2019 New Year occasion
Not only enterprises in the locality, some others outside the province have also positively responded.

The achievement was made thanks to the PFFC's initiative and creativity in joint propaganda and mobilization over the past years.

PFFC Vice Chairman Le Van Can said that every year, the PFFC proactively works out and realizes mobilization plans to present gifts to the poor on Tet occasion.

On the basis of a general plan, the PFFC's Standing Board asks two Fatherland Front levels in the province and member organizations to devise and disseminate mobilization plans to their members with the motto of successfully persuading as many organizations, units, enterprises, and individuals to join in giving gifts to poor people as possible.

However, mobilization and gift presentation must be transparent and timely.

The PFFC's Standing Board has requested the chairman of the Provincial People's Committee to write a letter to call on organizations, enterprises, and individuals to present Tet gifts to the poor and closely and effectively collaborated with Central and local press agencies to promote propaganda to arouse mutual affection in everyone, including business owners.

"The PFFC's Standing Board has also assigned each leader of the front to take advantage of their relations to mobilize enterprises both in and outside the province to join in presenting Tet gifts to poor people. The efficiency of this approach is more and more obvious," said Can.

After each time of mobilizing enterprises to give Tet gifts to the poor, all businesses making great contributions were promptly praised and recognized.
TIEN MANH