The movement “Tet (Lunar New Year) for the poor and victims of Agent Orange” will have been implemented for 10 years by this Tet. 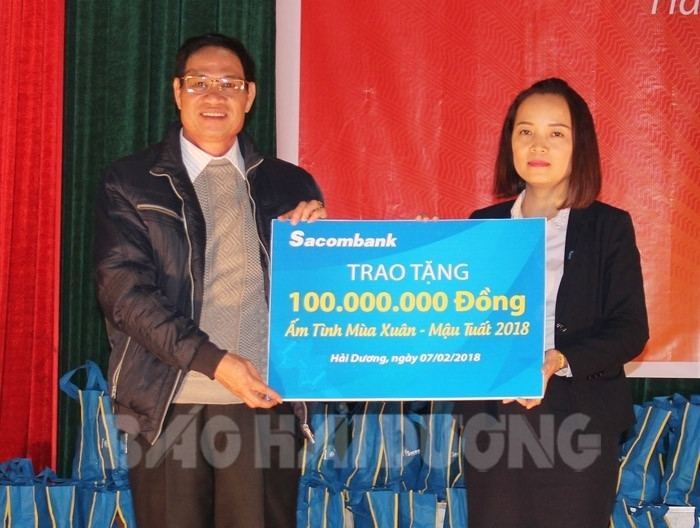 This year, it was an honor for couple Nguyen Van Dam and Dinh Thi Lay in Vinh Dai 7 hamlet, Van Duc commune (Chi Linh) to be visited and presented with a Tet gift by Mr. Nguyen Manh Hien, member of the Party Central Committee, secretary of the provincial Party Committee, chairman of the provincial People’s Council, and leaders of the provincial Red Cross Society (RCS) and Hai Duong II branch of the Bank for Agriculture and Rural Development.

The family of Dam and Lay, both 78 years old, is one of the most disadvantaged households in Van Duc commune. Being bedridden after a stroke, Lay has been helped with every activity, including eating and drinking, by Dam for the last two years. Their children are married but unable to help their parents because of difficult circumstances.

Receiving a Tet gift bag and thoughtful inquiries from the secretary of the provincial Party Committee, Dam emotionally said: “Thanks to the attention of the Party and authorities, my family has been given Tet gifts for years. These are comforts to poor people like us.”

In difficult circumstances, the family of Pham Huu Lanh in Phuong Dau hamlet, Phuong Hoang commune (Thanh Ha district) is frequently presented with gifts by organizations and individuals in and outside the province.

Lanh joined the battlefield in zone 9 during years of wars. When returning from military service, he was a 2/4-grade wounded soldier. Lanh’s son, Pham Huu Tan, was affected by Agent Orange with contracted limbs, making him unable to walk and have a normal life.

This year, apart from a Tet gift from the local authorities, another Tet gift, VND2 million in cash, was donated to Pham Ngoc Kieu Anh, Tan’s daughter, by benefactors.

“I am very happy to receive the Tet gift. I will deduct part of the money to buy books, notebooks, and learning tools and give the rest to my parents for supplementation to expenditure on Tet,” said Kieu Anh.

In 10 years of implementation of the movement "Tet for the poor and victims of Agent Orange" (2008-2018), RCSs in the province mobilized 456 turns of units, enterprises, and benefactors to join hands and help.

In the past 10 years, RCSs at all levels presented more than 160,600 gifts worth a total of VND57.559 billion to poor and policy families, victims of Agent Orange, orphans, lonely and helpless elderly people, and other disadvantaged people.

All-level RCSs also persuaded units, enterprises, and benefactors to support the construction of 167 Red Cross houses and offered 122 breeding cows to families for income generation, 73 saving records to families no longer able to work, 104,181 sets of clothes, and 1,652 blankets and mosquito nets to families in difficult circumstances.

RCSs at all levels co-organized free medical examination, health counseling, and medicine dispensation for more than 46,000 turns of people besides other assistance valued at over VND6 billion.

RCSs at all levels are striving to hand over 22,000 Tet gifts to poor people, policy families, lonely elderly people, and victims of Agent Orange in the province this Mau Tuat Tet.