Binh Giang district is oriented to develop into a dynamic urban area and together with Thanh Mien district become an important growth pole of the province. 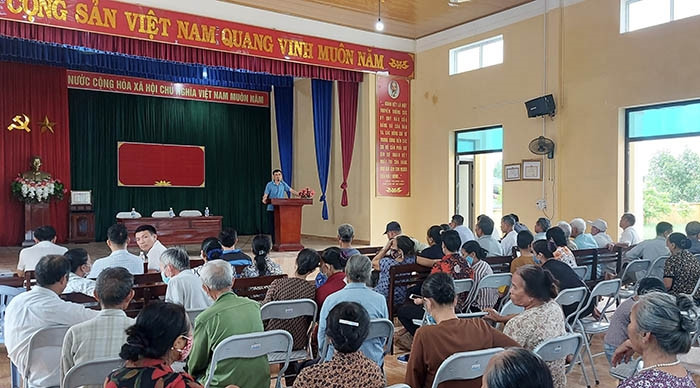 The Site Clearance Council of Binh Giang district holds a dialogue to propagandize policies on land recovery and site clearance for a project to build the expanded Phuc Dien industrial park in Vinh Hong commune
Therefore, the district authorities pay much attention to site clearance to carry out major projects.

Binh Giang district authorities are implementing seven key projects. One of them is a project to build a bridge across the Sat river and a road to the expanded Phuc Dien industrial park with a total length of 430 m.

This is part of a project to build provincial road 394B to connect national highway 5 and Ha Noi – Hai Phong expressway. The project uses 1.64 ha of land in Vinh Hung commune.

With drastic and quick spirit, the district Site Clearance Council sped up clearance and handed over the site to the construction unit to implement the project as scheduled.

To date, nearly 90% of the work volume has been completed. The bridge end connection ceremony is expected to be held this September.

The district People's Committee has consolidated the district Site Clearance Council and strengthened leadership and direction of site clearance in the locality.

The district People's Committee holds two meetings a month to hear the district Site Clearance Council report on progress and promptly direct and remove difficulties and obstacles arising in the course of implementation.

Trung Quy – Bac Ninh Investment JSC. is the investor of the expanded Phuc Dien industrial park project with a scale of over 235 ha. It is oriented to become a multi-industry industrial park with the method of renting out land and infrastructure.

Ground leveling for construction of a bridge across the Sat river and a road to the expanded Phuc Dien industrial park
When inventorying land and assets attached to land to clear grounds for project implementation, the district authorities encountered some difficulties and obstacles in determining the area for compensation and support.

The reason is that localities' land allocation data in 1993 and the data after field mergence, change, and rearrangement did not match.

During the process of field mergence and change, people in Hung Thang, Vinh Hung, and Vinh Hong communes lent or donated land to enlarge roads and field canals.

In addition, the land in the project coincided with the people's cemetery of the communes.

To date, people have basically agreed, measurement, owner recognition, and reckoning have finished, and it is expected that compensation and site clearance will begin in mid-August.

Vinh Hong is one of the three localities whose land was recovered to realize the expanded Phuc Dien industrial park project.

Chairman of the Vinh Hong commune People's Committee Nguyen Van Dich said the local authorities had coordinated with the district Site Clearance Council to take steps in site clearance and focused on good propaganda, mobilization, and explanation of regimes and policies for people to understand and agree to hand over land. The common viewpoints are propaganda for people to clearly understand benefits and responsibilities and balancing of interests among the State, businesses, and people.