Hai Duong people have been changing from productive thinking to agricultural economic thinking and from single value-based growth to multi-valued integration. 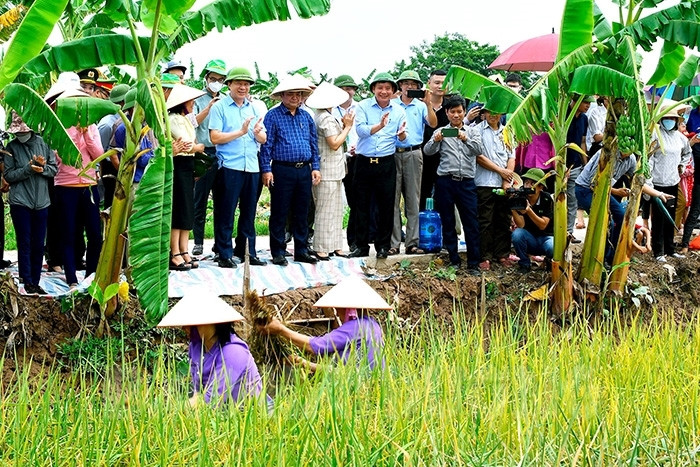 At first, I thought a minister might not pick up a phone call from an unknown number, but the first time I called, he answered after only four rings.

He is Le Minh Hoan, Member of the Party Central Committee, Minister of Agriculture and Rural Development. The Hai Duong Newspaper respectfully introduce his article:

Opening an old book, I found that the ancients called Ha Noi the capital city, the center of the Northern Delta. Surrounding the center were four directions: east, west, south, and north. In the east, there was a place associated with the word “tu” (four), which was Tu Ky, located downstream of the Thai Binh river system.

According to etymological lookup, Tu Ky means “four turns” in Sino-Vietnamese. Perhaps only geographers know for sure whether it is the fact or fiction.

One morning at the beginning of a week this June, I had a chance to visit Tu Ky and go to the fields with farmers to harvest early rice –ragworms.

Following a carrot harvesting festival in Cam Giang four months ago, Hai Duong held the event to experience cultivation and stick with rural fields through various activities during the harvest season.

On a peaceful dyke road, a small event was of great significance. Those were activating the dynamism of rural life and propagandizing methodical and thoughtful farming to tourists near and far.

It was so emotional to look at fields of rice plants bending under their ears in the harvest season, below which were ragworms and small crabs.

It was so emotional to mix with an idyllic, joyful, but equally unique festival.

There was very close and harmonious space among people with new vitality, new winds, and Tu Ky people’s way to do agriculture in a multi-layered and multi-valued direction, as in mild and concise messages dotted along the dyke road.

Multi-layers, multi-values, and the philosophy “agriculture for human life”, as in the district leader's festival opening speech, bears a lot of meanings and depth which are not easy to realize.

There may be an opinion that farming is to harvest the most output and bring about the highest income, so philosophies and mottos are unnecessary.

However, people in Tu Ky in particular and Hai Duong in general have bravely stepped out of that familiar and traditional way of thinking.

It's easy to follow the old road many people have gone. Opening a new path to reach a new goal requires perseverance and determination. Like people in Cam Giang, Thanh Ha, and Kinh Mon in the past, Tu Ky people nowadays dare accept challenges to make differences.

Choosing a direction is similar to Tu Ky people who stood in the middle of the "four turns of the road." They neither fell to the left nor leaned to the right and certainly did not want to lag behind. They chose to move forward in their own way.

From productive thinking to agricultural economic thinking and from single value-based growth to multi-valued integration plus a multi-layered production model were journeys to find values attached to their homeland.

The first layer is fertile soil thanks to ragworms and small crabs, the next layer includes rice plants bending under their high-quality ears, and the final layer consists of lively rural activities.

According to farmers' calculations, thanks to the multi-layered economic model, income per unit area has increased 5-7 times and possibly even higher.

And certainly, the value added from multi-layers and multi-values does not stop there. Apart from the layer of revenue and tangible economic profits, there also are layers of intangible benefits and values.

Many more layers of values will be crystallized from unique indigenous resources, local culture and history, and the rural social community structure. 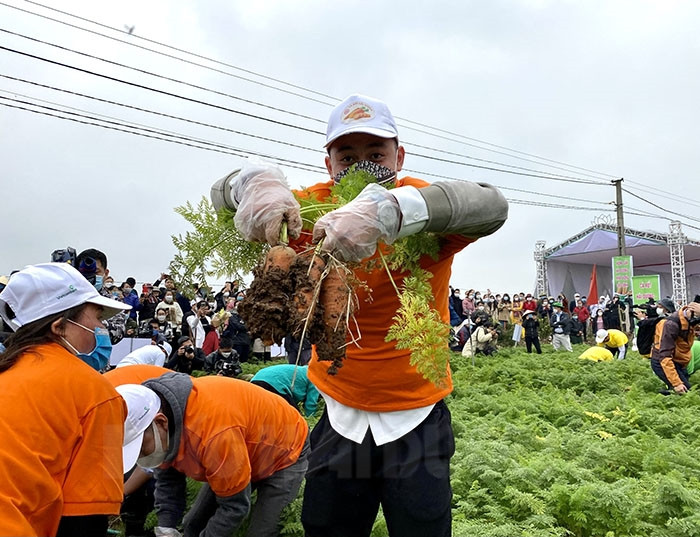 Hai Duong pays special attention to propagandizing and enhancing the value of the provincial agricultural products. In the file photo: Many famous players and artists participate in the Carrot Harvesting Festival in Duc Chinh commune, Cam Giang district, earlier this year
Many people often complain: "There is nothing in my locality!" and thereby sometimes looking for what they do not have.

However, it has been discovered that every locality has “three resources”: “natural resources”, such as fertile land or beautiful landscapes; “soft resources” like diverse culture, folk experience, indigenous knowledge, and historical traditions; and “human resources” imbrued with personal character, such as ideas, wills, spirits, and dreams.

Among those three resources, some are visible, but some others must be constantly dug up and nourished to bring out hidden things that are invisible but the layers of the highest values.

Through observation, one thing has been drawn that nowadays, consumers do not simply look for tangible products but pay more attention to impressions and emotions about stories of the process of creating products from those three resources.

And Hai Duong people have started to tell stories about lychees, onions, garlic, carrots, and today rice, ragworms, and small crabs associated with those hidden values.

The story is that Hai Duong people turned small plots of land into large fields by getting rid of fragmented mindset.

The story is that Tu Ky people turned their own characteristics into comparative advantages instead of being content with the long-standing traditional farming method which was no longer suitable for the ever-changing trend.

The story is that Tu Ky people is developing their environmentally and naturally friendly agricultural brands through the philosophy “agriculture for human life.”

Also in attendance at the festival in Tu Ky were experts, scientists, managers, etc. Everyone both engaged in discovery and had fun with Tu Ky people. Businesses went to Tu Ky for connection to take agricultural products far away.

Hopefully, enterprises going to villages will not only simply reach agreement on purchase and sale but also together with farmers create the highest value for products with layers of values linked from hidden things.

Agricultural product brands originate from farmers but need businesses’ companion and direction as well as the whole ecosystem’s contribution.

A famous economist said that when you only look at a single value, you overlook many others hidden behind which are sometimes much more valuable than the one you are seeing.

Hai Duong people are looking for those invisible values to integrate multi-layers and multi-values into each agricultural product of farmers and each product of businesses.

There is another saying: “It’s not what you can do that matters, what matters is that you did.” And Hai Duong people have done, are doing, and will continue to do it.

Thank Hai Duong, the Eastern land, with a fresh morning by a field of rice and ragworms in Tu Ky where everyone was excited and sending many happy emotions. The dyke road seemed to be bustling with the singing “ngay mua vui thon trang, lua reo nhu hat mung” (during happy harvest time in the village, rice shouts like joyfully singing).
LE MINH HOAN
Member of the Party Central Committee, Minister of Agriculture and Rural Development