The 17th provincial Party Congress defined "green, smart, and modern urban development" as a backbone of the economic structure in the coming period. 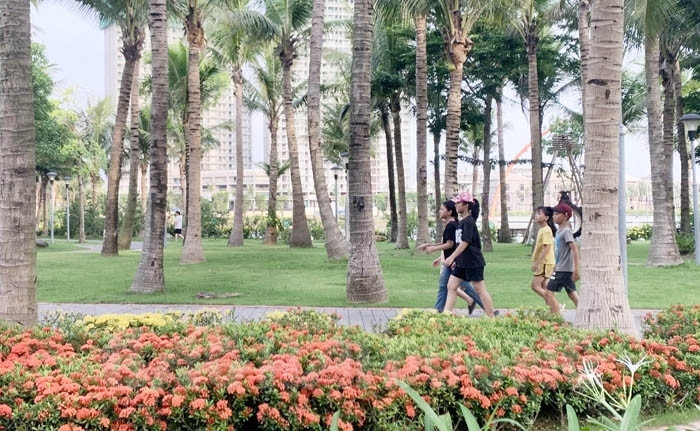 Attention has been paid to public space in the provincial urban development, creating a green, clean, and beautiful environment for people. In the photo: Green space in Ecorivers ecological urban area in Hai Duong city
To step by step realize the province's aspiration, at the end of last October, the provincial People's Committee approved a project for Hai Duong urban construction and development in a green, smart, and modern direction in the 2021 – 2025 period with orientation to 2035.

Through reporters' research, there is no locality in the country that has developed or issued its own set of green urban criteria.

Provinces and cities have only studied or built specific urban areas in a green, ecological, and modern direction following construction planning standards and Resolution No. 1210 of the National Assembly's Standing Committee on urban classification in 2016.

To build green urban areas, the Department of Construction has counseled the provincial authorities to determine green-oriented urban development targets suitable to the province's conditions.

In which, there are specific norms like increasing the proportion of land for trees, creating green space and green parking lots, building public space, highlight structures, and complexes of multi-functional mixed works, taking measures to improve urban environment quality such as collection and treatment of wastewater and garbage, promoting hi-tech and ecological industrial development, etc.

The province's green urban development goal was also confirmed and repeatedly mentioned in a report on the provincial plan in the 2021 – 2030 period with a vision to 2050 presented at the 11th meeting of the 17th provincial Party Committee on July 5.

In which, the turning of Hai Duong into a modern and civilized industrial province sustainably developing and imbrued with the cultural character of the Eastern land and a modern, green, smart, clean, beautiful, secure, and safe urban area with sustainable development and extensive international integration was defined as a strategic vision to 2050.

Along with industry, agriculture, and services, the promotion of urban construction and development in a green, smart, and modern direction to improve the quality of residents' lives was determined as one of four strategic pillars for Hai Duong to become a modern industrial province and one of the largest urban areas in the region with high-quality services for production activities in the locality as well as the whole Red River Delta.

On the basis of oriented contents for green urban construction, departments, sectors, and local authorities in the province have worked out and issued specific programs, projects, and plans for each period, with special importance attached to developing new urban and residential areas, building social and service infrastructure, etc.

Pham Van Quyet, Head of the Urban Planning and Development Division under the Department of Construction, said that since the project issuance, the making, adjustment, or approval of plans, district construction plans, master plans for urban areas, master plans at commune level, etc. had always stuck to the set green criteria.

As a locality having the highest per capita trees in the province, Chi Linh has taken many groups of general measures to realize the province's project, according to Nguyen Van Huynh, Standing Vice Chairman of the city People's Committee.

"Chi Linh city authorities pay special attention to creating public space and a green, clean, and beautiful habitat for citizens by heightening the percentage of trees in urban and public areas," said Huynh.

"To thoroughly handle domestic waste, the city authorities have planned and are carrying out procedures to clear about 10 ha of land to call on investors to build a waste treatment plant with advanced, modern, and non-polluting technology."

Hai Duong has been building and developing urban areas in a green and sustainable direction to create modern and ecological habitats for urban areas and improve the quality of people's lives.
PHAN ANH