Con Son - Kiep Bac festival does not belong to Hai Duong only but has become a common festival of the whole country for Vietnamese people to go to. 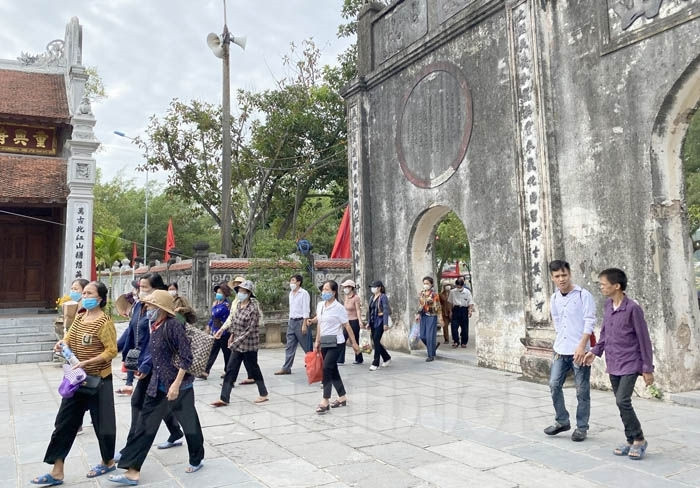 People from everywhere flock to Kiep Bac in the 8th lunar month to be immersed in the autumn festival's atmosphere
The festival has been recognized as part of the national intangible cultural heritage by the Ministry of Culture, Sports, and Tourism. Attending the Con Son - Kiep Bac Autumn Festival is attending the death anniversary of Hung Dao Great Lord Tran Quoc Tuan in the 8th lunar month.

The temple was located in the middle of Rong (Dragon) mountain valley in the territory of two villages, Van Yen and Duoc Son (whose vernacular names were Kiep and Bac, respectively), now in Hung Dao commune, Chi Linh city, resulting in the name Kiep Bac.

The temple was built on the foundation of Tran Quoc Tuan's residence. Photos taken by French people from an airplane in the early 20th century show that Kiep Bac temple was spaciously and superficially constructed.

Since then, the sacred temple has continued to be innovated, commensurate with the merits of the predecessors who defended the homeland.

In terms of landscape, with rolling mountains and vast waterways, Kiep Bac has both an important military position and a charming landscape, very suitable to go to the festival by boat.

Meanwhile, Con Son has the secluded and quiet appearance of a Zen place, appropriate to the Zen and for those having a stormy life to nourish their mind and regain balance for life.

Regarding architecture, though being ravaged by war, the temple with Nguyen dynasty architecture quite synchronous with precious bronze statues is still maintained in Kiep Bac. There remain imprints of an ancient pagoda with a system of Buddha statues and stele inscriptions of special value in Con Son.

In terms of archeology, Kiep Bac has relics of the Dong Son period and cultural traces of the first millennium, especially unique and monumental architectural relics directly related to Tran Hung Dao.

In the area, there were ancient pottery-kilns in the Grand Duke's manor – the original place of a pottery line of Xu Dong (old name of Hai Duong) in later centuries.

A typical terracotta tower, the foundation of a nine-tier lotus-shaped tower, and traces of Thanh Hu cave and a pagoda whose construction was presided over by patriarch Phap Loa in 1329 have been unearthed in Con Son. 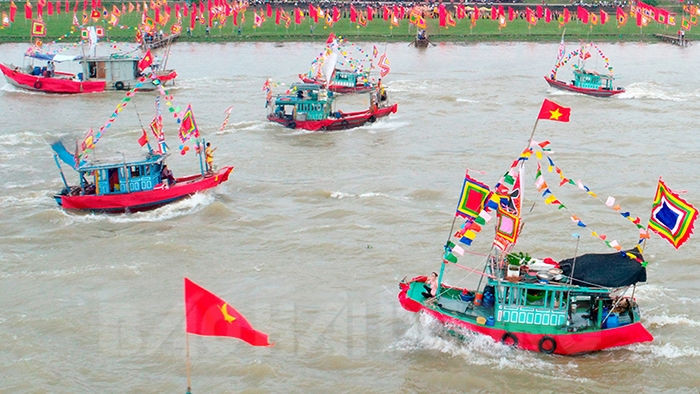 The army festival on the Luc Dau river (file photo)
Con Son - Kiep Bac festival is the convergence and crystallization of many historical and cultural values of the ancient Xu Dong – present-day Hai Duong.

According to the Management Board of Con Son-Kiep Bac Relics, Van Kiep/Kiep Bac has a special position in terms of traffic as well as military.

The Luc Dau river, flowing through the west of the relic site with a length of 10 km, is the confluence of six rivers: Luc Nam, Thuong, Cau, Duong, Kinh Thay, and Thai Binh from the northwest to the sea. This is a source of water which carries alluvium for fields and extremely abundant natural aquatic products for a large region in the northeast of the Northern delta.

As for traffic, it can be said that these were arterial feudal routes importantly contributing to economic exchanges and military and once creating cultural achievements.

Looking like the arm of a throne, Rong mountain in Kiep Bac surrounds valleys of the Thuong river, which encroach deep on the gorge, enabling thousands of warships to gather before a battle.

Vast waterways and villages can be observed from mountain tops, allowing soldiers to proactively advance or retreat for forward offensive or rearward defensive.

In the north, there are rolling mountains and forests, where tens of thousands of troops can be hidden and a safe base can be set up, while in the south, there are rich and densely-populated villages, which are a great source of talents and materials for battles.

Therefore, throughout the history of anti-foreign invasion, Kiep Bac always held a crucial position in the strategic region.

Thanks to his great contributions to the nation in the cause of national defense, a temple, called Sinh Tu, was built for Tran Hung Dao when he was still alive. After his death, he was granted the title "Thai Su Thuong Phu Quoc Cong Tiet Che, Nhan Vo Hung Dao Dai Vuong."

According to epitaphs at the relic, Kiep Bac temple was built on an area of about 13,500 m2 in the center of Kiep Bac valley after Hung Dao Great Lord's death in 1300.

At this year's Con Son - Kiep Bac Autumn Festival, an army festival showing the old Dong A's boiling spirit will be organized after a two-year hiatus because of the Covid-19 epidemic.

Locals and visitors will be immersed in a festive atmosphere with flags overshadowing the sky and boats gathering from various areas, reenacting the exciting atmosphere of the Tran dynasty's army and people in the past when defeating the Mongol invaders to preserve the territory of the country.
TIEN HUY