Throughout history, the studious tradition of people in the former Xu Dong – present-day Hai Duong has always been one of the bright spots of the national education and training. 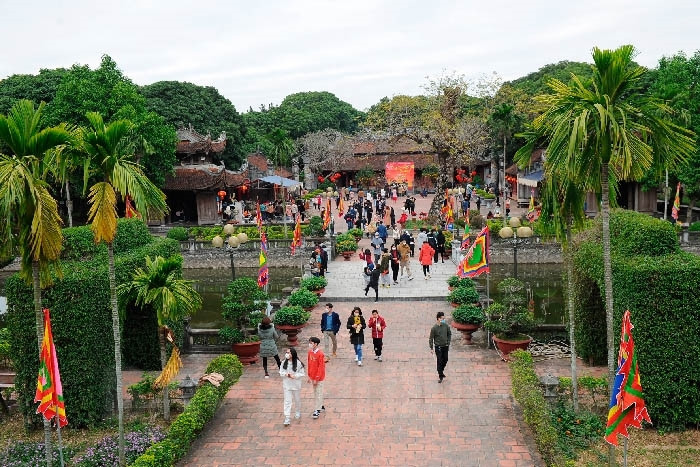 Mao Dien Temple of Literature - one of the symbols of Xu Dong's education
Continuing the learning respecting tradition of geniuses in the old days, generations of Hai Duong teachers and students nowadays are striving to realize the goal of taking the provincial education to a new height.

According to the book Tien Si Nho Hoc Hai Duong (Confucian Doctors in Hai Duong), Hai Duong had the largest number of Confucian doctors from the first to the last examination in terms of provinces and cities.

After passing exams, most of the top examinees joined in the cause of national construction and defense, many of them made great careers and became celebrities and bright examples for later generations.

Today, following the studious tradition of their ancestors, many poor, orphaned, sick, or disadvantaged students in Hai Duong have an iron will to overcome difficulties to rise.

The current funds of many families amount to 100 million – 300 million VND. Learning encouragement funds at all levels total about 124 billion VND. From these funds, poor students have been promptly supported to continue their dream of going to school.

Over historical periods, Hai Duong generations' flame of passion for learning has never stopped burning. Hai Duong is always in the nation's leading group in terms of educational achievements and quality.

For years, Hai Duong has always been proud to be in the top five provinces and cities with the best educational achievements in the country.

Being heavily responsible for training excellent student teams of the province, pedagogues at Nguyen Trai Senior High School for the Gifted in Hai Duong city have constantly strived to innovate. Both white-haired and young teachers are dedicated to their profession.

Teachers at all levels in Hai Duong today are always proud and respectful of the studious tradition of their forefathers. They consider this a motivation to overcome difficulties to rise and do their best for their work.

In the past two years, students had to study online many times due to the outbreak and spread of the Covid-19 epidemic. Not fearful of hardship, teachers in the province taught following their curricula by day and opened online tutorial classes for bad learners by night.

A lot of teachers did not hesitate to go to their students' houses to give them learning materials. Many unhealthy Covid-19 sufferers still brought a computer to give lessons from concentrated quarantine areas...

Numerous qualified young teachers invited by many units after graduation chose to return to the province with a desire to help the next generations shine and continue the studious tradition of their homeland with what they learnt.

Being grateful to their parents and teachers, Hai Duong students nowadays try hard for emulation and are determined to learn.

In recent years, 80% of members of the provincial excellent student teams have won prizes at national contests. Some students outstandingly snatched international and regional prizes.

A lot of Hai Duong students have received scholarships from international universities, such as Do Thanh Hai, a math major of Nguyen Trai Senior High School for the Gifted admitted to five American universities in 2020.
TIEN HUY